There's no housing slump at The Cypress

Raleigh retirement community has racked up $91M in sale - so far

RALEIGH – Bob and Martha Leak have been waiting since early October to move into their new condominium at The Cypress of Raleigh, the first continuing care retirement community to open in Raleigh in 24 years.

Their fourth floor unit is decorated and the curtains are up, but still they wait. They can’t find a buyer for their 2,600-square-foot house on Landor Road in Raleigh after 10 months on the market. 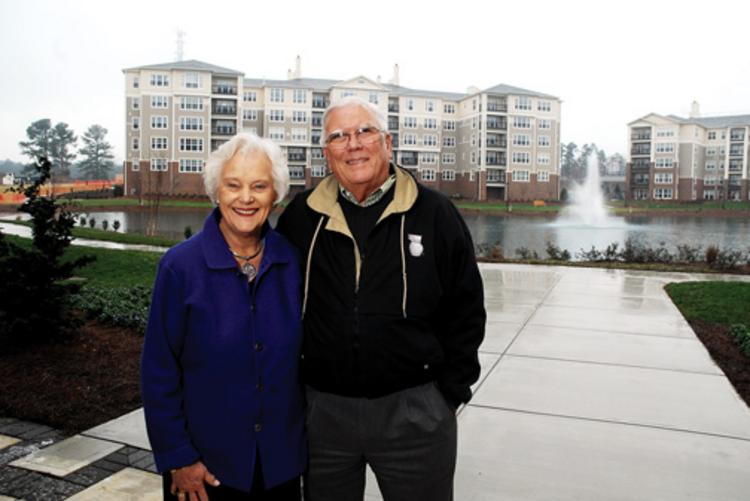 Bob and Martha Leak will move into their new home at The Cypress when their old one sells.

“I guess you can say I’m president of the bridge loan club,” says Bob Leak, 74.

While the Leaks continue to wait, others are moving in to their homes at The Cypress, where 158 units have been sold since the community opened in mid-September, says Cypress development partner Michael Sandman of Raleigh. That’s nearly $91 million worth of housing, with units averaging $550,000. Another dozen homes are scheduled to close in the coming weeks, Sandman says, as property managers have staggered move-in dates to accommodate residents.

Sandman says most of the purchases have been in cash, with only about 10 percent of buyers carrying mortgages. “Most of these folks … sold their (other) homes before they came here,” he says. “We had some people living at the apartment complex next door, or some were staying in their second homes at the beach.”

Plans for The Cypress, a not-for-profit entity, were on the drawing boards for more than two years before Sandman and his partners, Mark Andrews and Craig Huggins, broke ground in 2007 on the $120 million first phase of the 48-acre campus between Strickland Road and Forum Drive in north Raleigh. They hope to break ground on the second phase with an additional 61 homes in late 2009.

Among those moving in is George Miller, 77, and his wife, who relocated from northern California. “I must have looked at 30 brochures and visited six or seven communities around the country,” he says.

However, many retirees are delaying their plans to move into retirement communities because they either can’t sell their homes or their financial advisers are telling them they should wait until the economy improves.

“I just hope they are taking that advice with a grain of salt,” says Susan Williamson, president and chief executive of the North Carolina Association of Non-Profit Homes for the Aging. “I don’t think some financial advisers are looking at the whole picture of the elderly.”

Williamson explains that while communities such as The Cypress have facilities to accommodate residents who may one day need full-time nursing care, the number of beds are limited. “Getting into a CCRC depends on them still being able to go into independent living,” she says.

Soon, The Cypress will be joined by another new retirement community. Plans are in place for The Cardinal at North Hills, a for-profit continuing care community planned at the intersection of Six Forks Road and the Beltline in Raleigh. Partners Kane Realty and Drucker & Falk want to begin building the 202-unit, $150 million project in early 2010.

Back to News
©2015 TME Investments