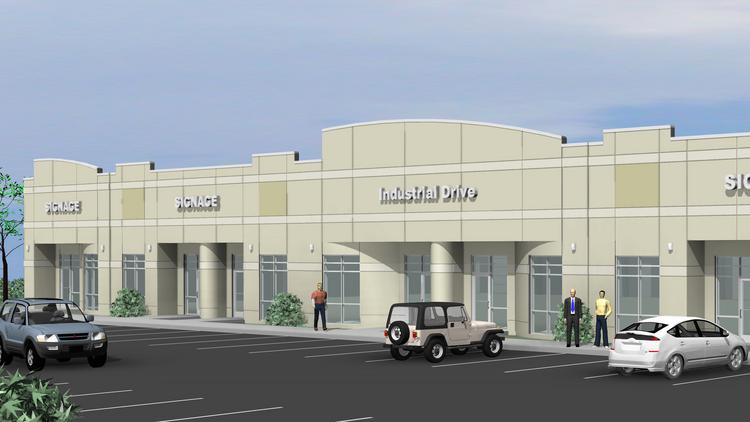 Manufacturing magnate Marc Noël wants to expand on a plan championed by former Gov. Jim Hunt in the 1980s to attract new industry to the eastern part of the state through expansion of his newly-renamed Triangle East Business Park in Zebulon.

Noël, through various subsidiaries, owns about 120 acres in Zebulon, formerly called Zebulon Industrial Park, where two of his largest manufacturing plants for the Nomacorc wine cork production company and the Nomaco thermosplastic manufacturing firm are based.

Above: Building rendering of a 20,000-square-foot office and warehouse building that is under contruction in Zebulon as part of the expanded Triangle East Business Park.

In January, he broke ground on a 20,000-square-foot speculative flex and industrial building that will be available for lease in the spring – a project that he is financing in collaboration with Raleigh real estate developer Mark Andrews of TME Investments.

But the bigger vision, Noël says, is the build-out of Triangle East's other properties and the addition of walking trails and other park amenities that could connect into Zebulon park facilities. The eight undeveloped lots, Noël says, could accommodate a maximum 180,000 square feet of new industrial and office space next to the Nomaco and Nomacorc plants that already employ about 500 employees.

"Gov. Hunt was very instrumental in helping us choose North Carolina as our place for business when we came here 26 years ago, and we still think it was a very good decision," says Noël. "He also had a vision for Triangle East, which was supposed to be a way to connect Research Triangle Park with the eastern part of the state. We still think that's a good idea."

The partners have also already mapped out a site suitable for another 72,800-square-foot industrial building between the Nomacorc plant off of U.S. 264 and the Wal-Mart Supercenter in Zebulon, which is being marketed by the CBRE-Raleigh commercial real estate firm, along with the $2 million, 20,000-square-foot building that is already underway.

Bobbitt Design Build is the construction contractor for the new building that'll be completed in May.

Back to News
©2015 TME Investments